The annual folk festival is warming up in Beverley

Beverley Folk Festival is now in its 34th year. We spoke to Director Jim Pybus to find out what we can look forward to this weekend.

“Music is definitely at the heart of the festival,” Jim enthuses. “We have over 80 acts appearing across our various onsite venues.”

Highlights include the three headliners: Jon Boden, Lau, and Eddi Reader. These will be supported by several acclaimed folk artists, including Heidi Talbot, False Lights, and Martin and Eliza Carthy.

“Eliza and Martin have a very strong connection with the local area,” Jim explains. “Her mother was part of The Watersons, who were based in Hull.”

The weekend festival will run from Friday 16 until Sunday 18 June and is hosted at Beverley Racecourse:

“It’s a beautiful green venue, just on the edge of the Yorkshire Wolds,” describes Jim. “With it being so close to the town centre of Beverley, we have arranged for shuttle buses to transport festival-goers to and from the bustling centre.”

The celebrations will extend to the streets of Beverley too, with a whole range of fringe events, including a Morris parade that will wind its way around the cobbled paths of the picturesque shopping town.

“Inside the grounds we have two big tops, which will house the main stage and the second stage,” Jim points out. “We will also have outdoor performances, food tents and craft stalls. It will be a real festival atmosphere.”

People can choose to experience the whole thing through a full weekend ticket with camping, or alternatively dip in and out of the event with half-day admission.

“As well as the music, we also have a fun weekend suited to all, with literature poetry, and music workshops.”

Jim and the festival team are also keen to attract new fans to the genre: “Folk has become increasingly popular in recent years and we have got some terrific young performers coming along,” adds Jim. 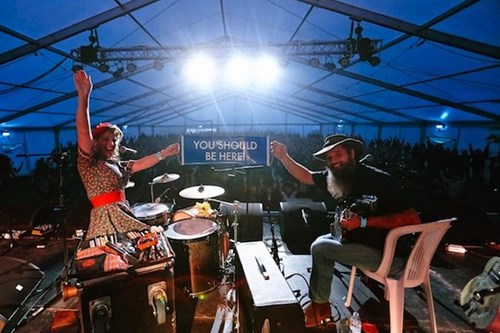 “Whilst folk is about tradition, it’s also about embracing the new generation of singers, songwriters and musicians and letting them showcase their talents.”

Young performers have the perfect platform at the Westwood Sessions. Hosted at the pop-up Bar 1690, the open mic event will see under-25s take to the stage. Meanwhile, the Area 2 Youth Programme that is dedicated to and run by young people aims to inspire fresh, new folk artists.

“It’s nice to keep the genre alive and vibrant,” Jim maintains. “For new fans of folk, I would say come along to the full festival. At an event like this, you get to experience the different styles within the genre and find out which one excites you the most.”